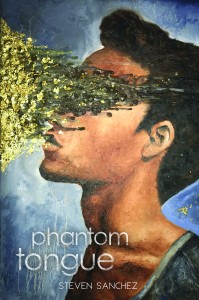 Phantom Tongue, Steven Sanchez’s debut collection, renders transgressive desires into the divine by evoking all the ways a person can pry his body away from the constrictions of religion, bigotry, and machismo to then finally exude its great powers.  Phantom Tongue beautifully illustrates the queer initiations that haunt its speaker—both in abjection and ecstasy– to reveal the powerful possibility of living in wonder. I love this book of incantation turning “an ocean into breath.”

Exiled from the cultural language of his Mexican ancestors, longing for the private discourse of queer desire, the young speaker in Steven Sanchez’s Phantom Tongue imagines—and then inhabits—a wondrous space where expression is tactile, intuitive, and intimate. What a heartfelt debut and a wound-healing testament to the fragile but resilient body, its whispered stories.

—Rigoberto González, author of What Drowns the Flowers in Your Mouth

At once excavating and luminous, each wrought poem here traces how a body extends and curls between light and shadow, friction and language: “Never confuse the two, / the difference between naming // and what the named will do / in the body,” Steven Sanchez writes, troubling when language is meant to shame the sexual, the racial or the geographic, but always attending to the radiant call under words. Phantom Tongue moves us from the frailties of the body to the edges of border and family, but ever with an intimacy and a vulnerability spoken from the pith of the nerve. Sanchez is a poet of extraordinary perception, and this is a startling debut: steeped in the senses, and its loves called without shame—written with such reverence for each of his subjects that each unfolding stanza dares their grace.

—Sasha Pimentel, author of For Want of Water